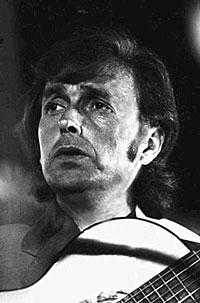 You are in...
Home Flamenco Gallery of artists Ramón de Algeciras

Ramón de Algeciras, the artistic name of Ramón Sánchez Gómez (Algeciras, 1938 - Madrid 20 January 2009), was a flamenco guitarist, composer and lyricist, brother of Paco and Pepe de Lucía, most popularly known for being Camarón de la Isla's guitarist in the 1970s

He started his career in 1953, thanks to his father, Antonio Sánchez Pecino, and worked with Juanito Valderrama's company for more than a decade Although he was well known for being Camarón de la Isla's guitarist for some time, he also worked together with other great flamenco artists such as Antonio Mairena, Pepe Marchena or La Niña de los Peines

He and his brother Paco were the first flamenco guitarists to play in the Teatro Real theatre in Madrid, in 1975 He composed more than 140 pieces, such as Rosa María, which he played with Camarón